Most kids look for superheroes in comic books, video games, and action movies, but the pre-K students at the Male Academy at Bussey Early Childhood Center in Southfield, Michigan only need to look as far as their classroom. Bussey Center’s teacher Jemal R. Larkins is a HighScope hero with the heart and spirit of an early childhood education (ECE) superhero.

He may not wear a red cape, but Jemal has other, equally impressive powers — HighScope principles, a nurturing and humble spirit, and an unwavering dedication to his students and their families. Jemal’s classroom is made up of three- and four-year-old African American boys, and he is well aware of the challenges they face. With research indicating that young black males are at higher risk for performing poorly in school and in life, Jemal has created a challenging and supportive learning environment for his students. A native Detroiter who was raised by a single mother, Jemal points out: “Many of the students come from a single-parent household. I understand that a male influence can make a positive impact on their lives.”

Jemal’s work is inspired by his favorite quote, attributed to abolitionist Frederick Douglass: “It’s easier to build strong children than repair broken men.” Since joining the Bussey Center in 2012, he has pursued that goal for his students, using the HighScope Curriculum to provide them with a strong educational foundation that will help them grow, build character, and become lifelong learners.

True to HighScope practices, Jemal also supports his students in developing strong communication and problem-solving skills, exploring creative arts, and engaging in dramatic play. Proactive decision-making through HighScope’s plan-do-review® process is also a priority: children make plans, carry them out, and then reflect on their efforts. 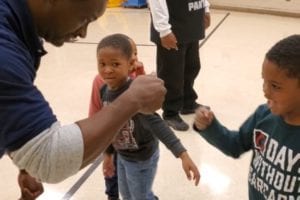 And, Jemal says, because boys are full of energy and require a lot of activity around movement, he invents purposeful and high-energy learning activities to engage them, including interactive games such as an “alphabet” bean bag toss designed to support the development of language and literacy skills.

According to HighScope trainer and consultant Gavin Haque, who nominated Jemal as a HighScope hero, Mr. Larkins exemplifies what high-quality early education should be for young children. “The Male Academy at Bussey Early Childhood Center is a sight to behold,” Gavin says, adding, “The HighScope Curriculum provides children with the opportunity to be independent and to grow, and Mr. Larkins understands and applies the HighScope principles flawlessly. He is truly a role model for other educators.”

Jemal earned his Bachelor of Science degree in Early Childhood Development in 2002 and a Master’s degree in Education for Administration and Supervision in 2005, both from Tennessee State University in Nashville. In 2009, he became a HighScope certified teacher, and he continues to advocate for the curriculum by providing peer coaching and training.

To stay current in his field, Jemal relies on valuable resources, such as HighScope’s popular book Make Room for Boys! Helping Boys Thrive in Preschool. “I love the HighScope curriculum, because it’s developmentally appropriate, and it works,” Jemal says. “It not only prepares children for kindergarten but for life. They are being prepared to become productive citizens.”